If your plants are suffering from issues caused by soil borne fungi, some fungi species in the genus Trichoderma can help fight off the bad guys. Some of these species of fungi, such as T. hazarium, also benefit plants by helping with nutrient uptake and the production of plant defense compounds. Basically, they are something you want to have in your soil.

This genus of fungi is naturally found in soils all around the world. The specific species of fungus found in your area depends on your location and soil conditions. Even though this fungus is sometimes naturally present, growers often apply it to their soils and plants.

Researchers and developers have realized the potential of this genus, and they have worked to develop strains that benefit plants. These are now available to growers to add to their soils and growing media. In fact, this fungus is one of the best biopesticides out there.

If you’re intrigued, continue reading to learn more about these fungi and their uses.

A Refresher on Soil and Plant Microbes

We know that soil is not a lifeless media of solely clay, silt, and sand. Rather soil is alive and teeming with various microogranisms including bacteria, fungi, and actinomycetes. Some of these organisms are harmful to plants, while others help plants by increasing nutrient uptake or protecting against diseases.

Growers often add microbes to their soils or plants to obtain these benefits. Many products containing microbes exist. Some are powders, others are liquids, and some are mixed with nutrients. Plant microbes can be extremely beneficial to plants, even if they are not recommended by soil tests like chemical nutrients are.

Plant microbes are a part of a group of materials known as biostimulants. These are substances that provide plants with benefits such as increased vigor and resistance to disease, but are not nutrients. They include humic acids, seaweed extracts, beneficial bacteria, and beneficial fungi. Some of these beneficial fungi belong to the genus Trichoderma.

Trichoderma is a genus of fungi that are naturally found in soil. Since this is a genus, there are many different species that fall under this category of fungi. Remember, the last three taxonmic ranks are family, genus, and species.

When people say Trichoderma in the context of plants and pests, they are often referring to specific species which are used to help grow plants. However, remember that this word also refers to a whole genus of organisms, not just one specific species.

Some species of this genus harm humans, plants, and mushrooms. Others provide benefits to other living organisms. This genus is a diverse group of species.

With that said, different species are found throughout the world. The specific species naturally found in the soil vary depending on location. They are often the most common fungus in a soil that is able to be grown on a culture.

All species in this genus share certain characteristics. All species live in the soil. Many of these species easily colonize plant roots and form symbiotic relationships with plants. This means that the plant helps the fungus and the fungus helps the plant. Unlike some fungi, these species are not host-plant specific. This means that they can form relationships with many different plants.

It’s important to remember that while many members of this genus are beneficial, some are harmful. Some species do not help plants, but are actually the cause of plant diseases or infections in humans. One species in a major pest of mushroom crops. Another species is a common mold found in houses.

The good species do play a major role in agriculture and horticulture. Different species of Trichoderma have been used to control pests and pathogens on plants beginning in the 1930s. Since this time, people have continually studied and researched more about this fungi.

Trichoderma harziarum is a species of fungus often used by plant growers. The strain T-22 is the strain of this species that is most commonly used. It was created in the mid 1980s by Gary Harmann at Cornell University after many years of work. It was first registered in the US in 1990 and has been on the market ever since.

Today, this species and strain is used for biocontrol efforts more than any other. While other species of this fungus – including those naturally found in soils – can provide advantageous effects to plants, if you are purchasing a product it should be T. hazarium T-22.

This strain is preferred to others because it forms colonies on roots better than other strains do. It also does a better job at controlling harmful pathogens.

Another advantage of T-22 is that it can grow on roots as they develop. This allows it to be applied to seeds, since it can survive even when roots are not present. Other species and strains do not possess this ability. So, if you’re looking to use Trichoderma, look for T-22. 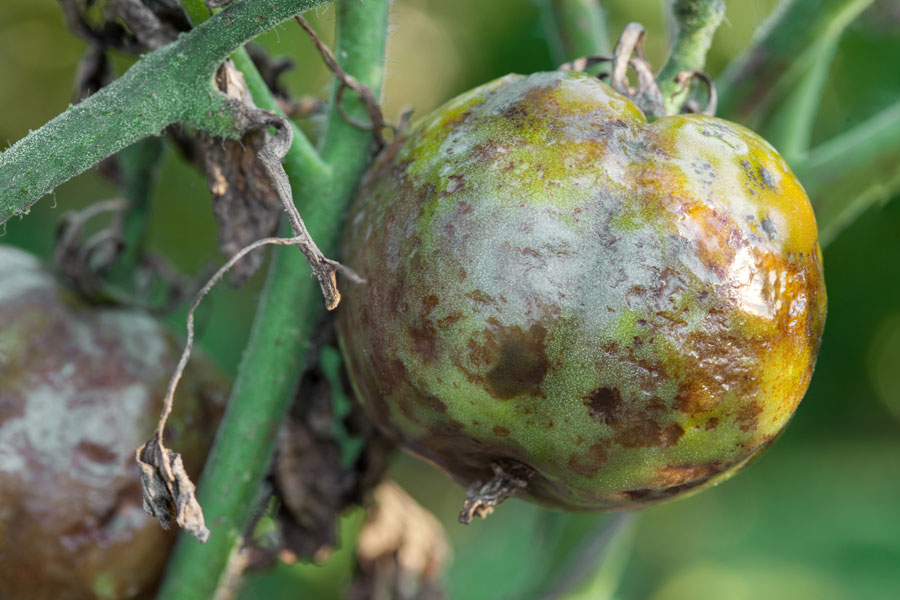 Use as a Biopesticide

One of the main uses of this fungus is as a biopesticide. What is a biopesticide? It’s a naturally occurring substance that can be used to control and treat pests. Many biopesticides are used by organic growers or by those just wanting to lessen their applications of synthetic substances. Some common biopesticides include Bacillus thuringiensis (Bt) and neem oil.

This fungus is used as a biopesticide against harmful fungi. You may be wondering why these fungi are subjects of attack. The answer is that they are competition for Trichoderma. In order to have full access to food and water, this fungus kills off the other ones.

The fungi that are attacked include some fungi which cause common plant diseases. These pathogens include Pythium, Rhizoctonia, and Fusarium. These pathogens present the following symptoms.

Pythium: This fungal like mold known as an oomycete causes root rot in plants. Some symptoms include stunted plants and brown root tips.

Rhizoctonia: This fungus can cause root rot and stem rot. Symptoms include wilting during midday and red/brown lesions near where the plants emerge from the soil.  It also also responsible for the phenomenon known as damping off.

Fusarium: This fungus is the causal agent of the disease known as fusarium wilt. Symptoms include plants that are yellow and wilted.

Along with treating fungal pathogens, this biopesticide shows promise is combating viral pathogens. A paper published in 2016 explains the impact T-22 had on cucumber mosaic virus in tomatoes. Results showed that plants treated with T-22 had resistance to this virus.

The fungus did not impact the virus itself, but rather made the plant experience increased defense mechanisms. In human terms, it did not work like an antibiotic on a sinus infection. Instead, it acted like an orange that boosts the immune system.

This is just one study. It is possible that T-22 can help plants fight off other pathogens. However, research has not been conducted to test the effectiveness of T-22 against all harmful organisms.

How it Works at a Biopesticide

One reason this fungus is such a good biopesticide is that it works in a number of ways. It doesn’t just rely on one method to attack harmful organisms.

One main way it works is by secreting a specific enzyme that attacks enemy fungi cell walls. After the cell walls are destroyed, the bad fungi can be completely killed. This enzyme is called endochitinase. One reason that T-22 is such an effective biopesticide is that it produces more of this enzyme than other strains.

Another way it attacks other organisms is by releasing toxic compounds. These compounds then harm fungi and other microorganisms.

One more way T-22 protects plants from harmful organisms is through direct competition. As this fungus lives on plant roots, it uses nutrients and plant exudates. This prevents harmful fungi from gaining access to these.

Use as a Bio Enhancer

Trichoderma is also used as a bioenhancer. This means that it improves plant growth and health without directly providing nutrients to the plant. These species do this in a number of ways.

One way is by helping plants take up nutrients. Remember, just because you add nutrients to your growing media, it doesn’t mean these nutrients are accessible to plants. This bio enhancer helps plants soluize nutrients such as phosphorus. This makes the nutrients available to your plants.

Another was that this fungus works as a bio enhancer is by increasing root growth. As roots grow longer, they are able to reach out for nutrients and water. This leads to increased drought tolerance in plants.

This fungus also impacts the production of plant hormones. This helps plants better respond to stressors.

How to Use Trichoderma

So, now that you know all about the benefits of this fungus, how do you use it? The answer is there are a number of ways you can apply it to your plants. The good news is that the fungus works in any soil type and on any species of plant.

No matter the method you’re using, one thing to remember is that this is a living organism that grows rapidly. This means that you don’t need to apply a lot at once! Just add a little and the fungus will replicate itself and cover a larger area. Also, since it colonizes roots, as the roots grow, so will the fungus.

One way to apply Trichoderma is by coating the seeds. This just involves dusting the seeds with powder containing the fungus. As seeds germinate and their roots grow, the fungus will colonize the roots and grow with them.

Another way is to dip plant roots or transplant plugs into a solution of this fungal powder and water. This acts in a similar way as with seeds, except you are adding the fungus a little later in the plant’s life.

A final way is to apply directly to the growing media. This may be done either while plants are growing or when the area is empty. For this method, you can either spread powder or spray a solution.

This is helpful information to know when controlling pathogens. You may be able to kill harmful organisms while not killing this biopesticide.

Although some species of this fungus are used for growing healthy plants, other species in this genus are used in other ways. Some of these ways rely on the fact that these species are great at producing enzymes. Some of these enzymes help break down complex starches. This is useful in a variety of ways including conditioning fabric and making feed more digestible to animals.

You now know what Trichoderma is and how it is used in the context of growing plants. Remember that this genus of fungus is made up of many different species. The species that is most used in agricultural and horticultural contexts is T. hazarium, and T-22 in the most commonly used strain.

T-22 can be used as both a biopesticide and as a plant bio enhancer. It works as a biopesticide to fight against harmful fungi and potentially other pathogens such as viruses. Some of the fungi it can fight include pythium and fusarium.

As a plant bio enhancer, it increases plant health. It does this by increasing access to nutrients and increasing root growth.

This fungus can be applied in a variety of ways, including to the seeds, transplants, and soil. It works in any soil type, climate, and on many species of plants. It is most often applied as a powder or a liquid.

If you are suffering from fungal pathogens, or just looking for a boost for your plants, this fungus is a great choice. Just look for products containing T-22 and apply following package instructions.