How to Treat Powdery Mildew

Whether you’re a first-time grower or a seasoned pro, you’ve probably wondered about how to treat powdery mildew. This common fungal disease can quickly get out of control, so it’s important to learn how to handle it.

Before you can learn how to treat powdery mildew, it’s helpful to have some background information on this disease. In this guide, you’ll learn about the causes, symptoms, preventative measures, and treatment for this fungus. 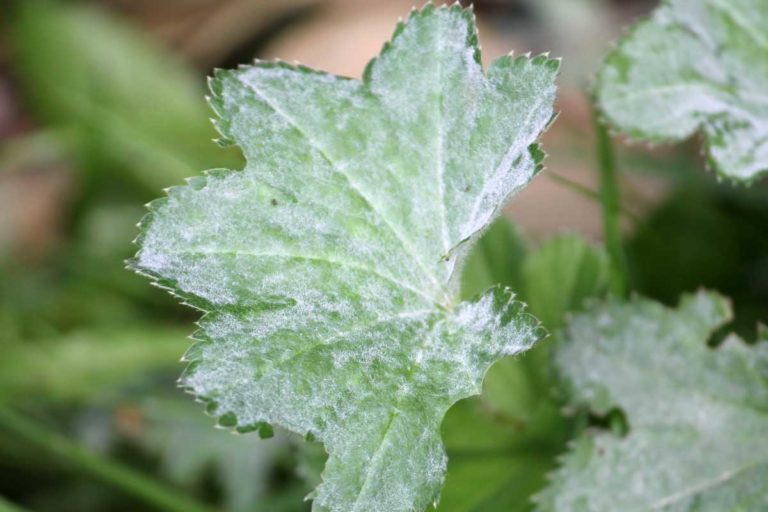 What is Powdery Mildew?

Powdery mildew is the term given to a group of fungi. Even though this term applies to different species, all species exhibit similar symptoms. The key visual cue that your plants have this fungus is a white, powdery substance covering the leaves. You guessed it, that’s where the name comes from. Some of this white substance is made up of mycelium and some of it is made up of spores.

Some species of these fungi are host specific, meaning they can only survive on one species of plant. Other fungal species can live on a variety of plant species.

All of the species require live plants. While the fungi can survive the winter in the form of dormant spores, they cannot grow without living tissue.

The fungus exists on a plant as mycelium – a group of fungal tissue. When the conditions are right, damp and dark, the mycelium produces spores.

Once spores are produced, they travel to other plants via wind, water, or human movement between plants. Once the spores land on new tissue, they form hypha to attach to the plant. When enough hyphae form, they become mycelium. This cycle continues, spreading the fungus between crops.

A special type of asexual spore can survive cold conditions of winter. This allows powdery mildew to exist through multiple seasons.

What are Favorable Conditions for this Fungus?

These fungi have a hard time surviving direct sunlight and high temperatures. Therefore, this disease is not common during hot, sunny summer days. In fact, days such as these can help stop the fungi in its tracks.

Why is it Problematic?

First off, this disease can directly weaken plants. As part of its life cycle, the fungus produces structures called haustoria. These structures enter the plant and help the fungus absorb plant nutrients.

Second, it can slow or even stop the photosynthesis process. Photosynthesis is key to plant growth. When photosynthesis is inhibited, plants end up small and weak. No matter what sort of plants you’re growing, if they’re not going through photosynthesis the way they should be, you’re going to be left with an unimpressive yield.

Is Powdery Mildew Harmful to Humans?

If you’re a grower working around powdery mildew, you don’t have to worry about your health. Being around the fungus isn’t harmful. However, this fungus can be a risk to your health or your customer’s health if it infects a crop that’s later smoked.

The short answer is yes.

Smoking powdery mildew can create serious health issues involving the respiratory system. This is especially true for people suffering from conditions such as asthma.

It will also make your product seem like a low-quality option, and it can scare away future buyers. The last thing that you want is to have this fungus on buds, which is why you have to take care of the problem before it has a chance to spread.

It Spreads and Persists for Multiple Seasons

This fungus is particularly problematic because it spreads through the air in later stages. It can also survive on plants through multiple seasons if they aren’t removed from the area. That means you could be fighting this fungus for many seasons if you don’t properly deal with it the first time.

There could be a weed harboring spores sitting at the edge of your garden box right now, just waiting to spread the fungi to your important crops. Whenever you deal with a plant that suffers from this problem, make sure you remove it from your growing area so you aren’t fighting a perpetual problem.

When you’re dealing with fungal outbreaks indoors, you should also try and limit airflow over infected crops, because the spores spread through the air and good airflow can help them spread more rapidly to your other healthy plants. 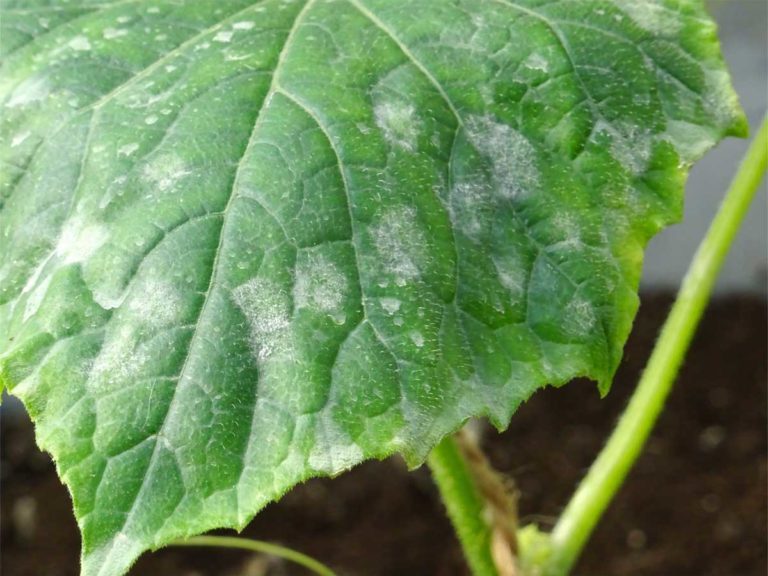 As a serious grower, you need to understand what this fungus looks like. It also helps to understand what stage the fungus is in depending on how your crops look. Learn to recognize the problem and you’ll know what you can do to treat it when it shows up. Fail to recognize it and you’ll be left wondering what you should do for your withering crops.

How to Watch for Powdery Mildew

Knowing how to spot early warning signs means you can treat your plants faster and keep them in better health. That’s why it’s important to look for these early signs while monitoring your plants for health.

Small sections of gray or white fungus on the upper portions of the leaves, usually on the fan leaves first. It starts off as tiny white bumps and progresses.

While the fungus is generally visible on the leaves before the buds, it does infect plants’ buds. Look for small blisters on the buds followed by a white powder.

Even before the mildew shows up, be aware of bushy and damp sections of your growing environment. These are spots where the mildew might show up.

What You Can Do about this Fungus

It’s one thing to know about how to spot this white powder after it’s already on your plants. It’s also important to know how to treat any mildew that you do find. And make sure to learn how to prevent the fungus from occurring in the first place.

How to Eliminate Risk Factors

One of the best things you can do to prevent this disease from affecting your plants is to reduce your risk factors as much as possible. Keep the below recommendations in mind when growing plants, and you’re less likely to run into issues with fungus and mildew in general.

If you’re plagued with this fungus, you’re probably wondering “How do I treat powdery mildew?” The answer is that it depends. There are a few different treatment options that can work.

If you’re looking for a way to kill powdery mildew, you might be thinking about sprays. However, you should be thinking about using light. The BioRadiance BRe3 utilizes radiant energy to destroy bacteria and fungi. 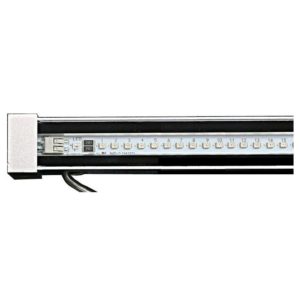 Not only does it eliminate those harmful pathogens, but it also boosts plant growth, enhances root development and can help improve clone production. The BRe3 isn’t a UV light, so it offers better penetration results than UV lights. Not only that, but it can effectively kill off the fungus in just 24 hours after installation.

How to Get Rid of Powdery Mildew During Flowering

Fortunately, the powerful BR3e light can safely kill powdery mildew during flowering. You don’t have to worry about the light damaging your crop, as you do with sprays.

If you don’t want to invest in the BRe3 light, the next best option is a sulfur vaporizer. However, you must use these with care. Install the vaporizer to operate for approximately 10 hours at night. Before turning lights back on, take care to evacuate all the air out of the space. If you use the sulfur vaporizer improperly, you can damage your plants.

You can also apply a commercial product known as Eagle 20 to your plants to reduce issues with powdery mildew. Many agricultural states require a pesticide applicator’s license to purchase it and use it. It is strong and effective. Make sure to coat your plants heavily before expecting it to take effect.

Most of the home remedies suggested as a treatment, such as baking soda or Safer Fungicide, don’t work fast. For them to have a chance at working they must be applied very early on. Also, more serious infestations are almost impossible to overcome.

If you’re relying on one of these other methods, you could end up having to separate the healthy plants from the unhealthy ones. Since the fungus spreads from one plant to another, it’s best to take out one heavily infected plant to spare the rest. If you remove an infected plant, take it far from your grow area. Make sure it doesn’t get composted or you could re-introduce the fungus into your next batch of plants.

Once you notice infected plants, you must also consider whether or not you want to treat your plants. If you notice your buds are infected close to harvest time, spraying can damage the quality of your buds. Depending on the product, spraying buds before harvest can make them harmful to humans.

How to Remove Powdery Mildew from Buds

So, if you can’t spray, what should you do?

You guessed it, use the BRe3 wand. Most of the time if you treat the area using the BRe3 wand, you can restore your plants’ good health.

What if it’s Too Late?

While you might not want to admit it, you can’t solve all the problems with your crops. If you haven’t got the powdery mildew on your plants under control, you’ll need to take the necessary precautions.

If your buds have powdery mildew, recognize this is a low-quality product. More importantly, distributing the product could harm others.

Powdery Mildew on Buds After Harvest

If you harvest buds and see powdery mildew on them after harvest, it’s too late to treat the fungus. However, you can take the proper measures to prevent it from spreading.

Powdery mildew is a serious disease that every grower deals with at some point. Even though it’s so common, it can still be tricky to properly treat as each occurrence of this disease is different. Be careful to assess the situation. If you can, try the most proven options first before removing infected plants. Most outbreaks can be controlled if you move quickly, but only if you’re willing to invest in effective tools like the BRe3 wand.

Better yet, work to prevent this fungus by controlling environmental conditions. Aim to keep relative humidity under control and increase airflow by installing fans. Prune plants to allow light and air to penetrate lower areas.

Now that you know about this common disease and how to treat and prevent it, you’ll be better equipped if this fungus strikes.

Understanding the Benefits of the BioRadiance BRe3 Wa